Spoiler Guy
Home List Top Military based anime- You should give a watch! 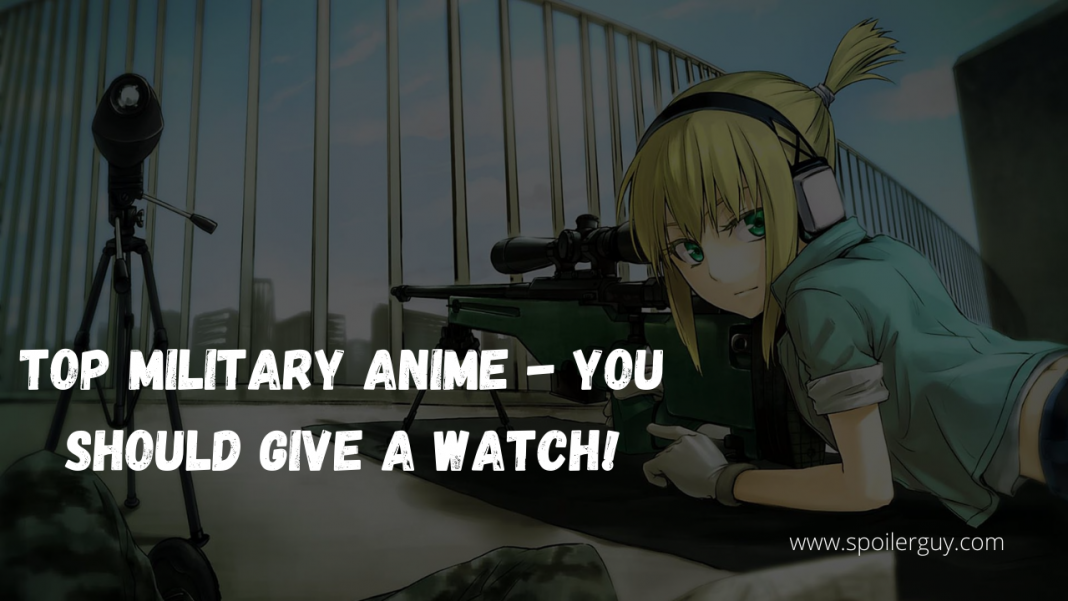 Military-based anime is another category that gets us all fired up to binge-watch the whole season at once. In several militaries or war-based anime, we have seen war evolving where new and advanced technologies are being experienced. In a way, we can say the mechanics of battle has changed over time but the concept behind war still remains the same which is to kill your opponent before he kills you.

Tanks, spacecraft, and gas-powered mobility gear are all used by the armed forces portrayed in these anime. They also include a character who believes in playing mind games with the opponent in the war and is weak at physical activities.

A tremendous battle once raged between the Republic of Frost and the Royal Empire, but the fight was ultimately ended three years ago by a pact. The Empire, ravaged by the conflict, forms the military group Pumpkin Scissors to aid in the reconstruction of their war-torn country. When a mystery corporal joins the squad, however, the team’s seemingly routine missions take a turn for the unexpected. Furthermore, it is officially available in Funimation or else you can read the manga on the official website of Kodansha!

On his day off, Youji was an off-duty Japan Self-Defense Force (JSDF) officer driving to an anime convention. Then a gateway opened, releasing demons and knights who slaughtered everybody who stood in their way. Youji is now part of a recon team being sent through the gate to assess if the world beyond is a threat and what steps must be done if peace with the reigning empire on the other side is not possible.

Though the gate opens a series of chaos for both the world. The Japan Self Defence force helps both the world to establish a balance in relation to one another. The anime also has a bit of fan service. You can watch gate online on Netflix.

The narrative is set in a world where an unknown illness has killed everyone saves children under the age of thirteen. Vampires enslaved the youngsters after that. Yuichiro Hyakuya is the protagonist of the manga, who aspires to be powerful enough to slay all vampires. The human organization has set up a military to deal with the Vampires and working on weapons to banish the vampires forever. However, both sides are strong to get defeated by one another.

When monsters push mankind to the verge of extinction, the organization Fenrir sends forth squads equipped with God’s Arcs to eliminate the monsters and reclaim the world. Unknown life forms are known as “Oracle cells” begin their uncontrolled devouring of all life on Earth in the early 2050s.

Their voracious hunger and incredible adaptability give them the nickname “aragami” first, then terror, then awe. Urban civilization crumbles in the face of an adversary impervious to conventional weaponry, and mankind is pushed closer and closer to annihilation every day. There is yet one glimmer of hope for humanity. The wielders of “God Arcs,” living weapons with Oracle cells, have been formed into an elite force as a result of their creation.

With the threat of terrorism hanging over the world’s nations, Mithril, a covert international organization, was formed to battle terrorists by hitting them in the heart with modern weaponry and highly trained and specialized warriors. People are known as “Whispered,” human databases of “Black Technology,” which are the source of Mithril’s advanced technology.

Sagara, a military sergeant with the mercenary organization MITHRIL, disguises herself as a high school student in order to safeguard a ‘Whispered’ girl who carries significant technical secrets in her mind. Only anime could take that concept and add mechs, straight-faced humor, and uncontrolled action to it.

This is all about the Military based anime. Further, the list will get updated with time. Till then stay tuned to Spoilerguy.