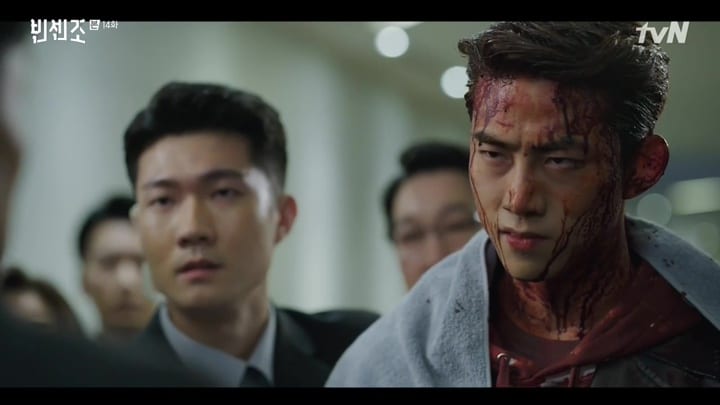 After the dramatic cliffhanger in episode 12, we expected intense scenes in the upcoming episodes. Vicenzo delivered just that though episode 14 was more of a filler-ish thing. Vincenzo episode 15 is expected to bring the story to its final phase with an even darker turn of events. It is clear from the last episodes themselves that the closest may actually not be as trustworthy as they seem.

Now Babel gears up to wreak havoc as a payback for all the dirt Vincenzo & Hong have thrown their way. So it’s clear there will be bloodshed accompanied by more drama. But the question is will it be enough for a satisfying finish?

Let us look at the events leading up to Vincenzo episode 15.

The Story So Far

Turns out Mr. Cho was working with the international security Intelligence services. His aim was just the Guillotine file but of course, Vincenzo wasn’t just going to let him have hit. After a short scuffle, it lands in Vincenzo’s hands.

Meanwhile, Jang Han-Seok holds his first board meeting as a chairman. He’s charismatic and motivating so everyone feels good about him being the chairman. Now they also need to work for his inauguration program.

Though the secret of the Guillotine file was revealed to Jang by Mr. Han. This obviously alarms him and he orders Han and Myung-Hee to get the file at any cost. The residents are forever providing comedic relief with their antics.

Worried that Vincenzo paid for their holiday only to get the gold makes them return in a rush. Of course, Hog informs the duo underground who make their exit swiftly. Once upstairs they pretend to pray at the temple and ask for privacy. After making sure that no resident suspects him, Vincenzo makes his way to Hong and their assistant.

Who are crestfallen to know the gold cannot be reached unless the plaza is demolished. Getting down to business Vincenzo learns from the prosecutor that the union leader’s testimony. But alas he is dead. Vincenzo doesn’t seem like he is too stressed about this since he says they will find evidence their way.

As expected of an experienced Consigliere, as the story deepens much more detailed and calculative plans are bound to be made. After a good amount of effort, they spot a rat amongst the Union put by Babel. They go about in their routine style making the traitor beg them and do anything they ask for.

A clever trap is set up between him and the Babels Vision team’s leader exposing all anti-union activities being done on the orders of the chairman. This works like magic. It is used by Vincenzo during Jang’s inauguration ceremony right in front of the media while he and hong enjoy popcorn.

As if getting embarrassed was not enough Han Seok gets arrested for anti-Union activities. Myung tries to argue that because of lack of evidence he cannot be arrested. But our gang is a step ahead since they have evidence from the one who ran over the Union Leader.

Again Babel being Babel escapes the situation without taking much responsibility. The entire fall is taken by the vision team leader. Vincenzo & Co shift their focus to Babel’s paper company which helps them get the money etc. Now to get the files with the evidence they need to get into a gallery.

They manage to do this with ease, though almost getting caught in their disguise. To get out of it they manage to show a really passionate kiss which could be a sign of the blooming romance between the two.

For the first time in a while, Myung stops being complacent and puts up a plan to get rid of Vincenzo. How does she do that? Give Vincenzo’s Italian enemies the tip and they come running in pursuit of him!

Now with enemies from all sides converging what options does Vincenzo have? Vincenzo Episode 15 will be the starting point of the climax, with him not only having to protect himself and Hong but the residents.

If this attack fails Babel will get even more offensive. Vincenzo episode 15 onwards the tone of the plot is expected to get even darker and messier. Considering how worried the younger bro of Seok is and Vincenzo’s given situation they may join hands.

Vincenzo episode 15 should also put the residents in a position to actually work instead of being liabilities. We know Mi-Ri is an expert with technology perhaps get her to hack into stuff. Get more concrete evidence.

Vincenzo lacks loyal support or proper alliances with people in power. Vincenzo episode 15 is the right time for him to look for competitors of Babel to join hands with and overthrow this menace.

Episode 15 may also be the break in their romance due to how dangerous it could get. Also Babels only chance to knock out Vincenzo. Cause if his mafia instincts awaken it’s game over.

Also, the series will be on a one-week hiatus after this week so expect a lot of information to be cramped up in episode 15. Episode 15 starts the final cour of this dark comedy.

Mr. Queen Episode 12 is Arriving a Little Earlier than Expected...