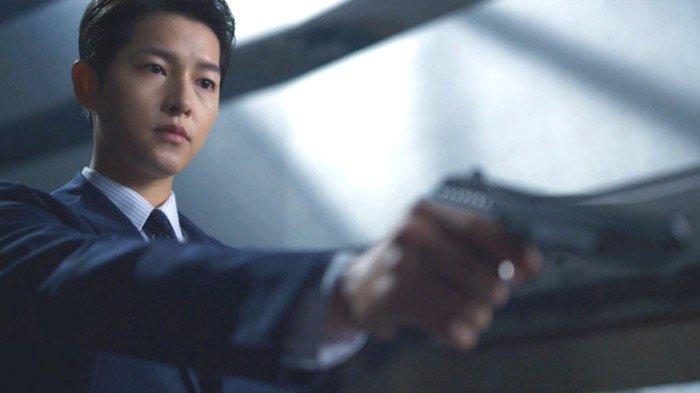 Vincenzo is a Song Joong-Ki starrer that started airing in February 2021. It is a dark comedy set up in Italy and Korea. The drama follows Vincenzo, who is a Consigliere, and his journey to and in Korea.

In simple terms, he’s an Italian mafia’s legal adviser. Charming, polite but ruthless and cruel at the same time this man is as dangerous as he sounds. As of now, this story takes place after he escapes to Korea following his boss’s death.

His motives and grey morality combined with his complex past lead to many unfathomable events. Vincenzo does manage to meet his goals but also corrects a few wrongs.

The latest episodes had high ratings & excellent reviews only increasing the hype and expectations from episode 5.

From quirky comedy to ruthless villains Let’s check out what more is in store for us from episode 5!

Cha is a hundred percent sure that Vincenzo has some big motive for pursuing and protecting the plaza so extravagantly, but despite her tries to get Vincenzo to open it up, he brushes her off. Thanks to how high profile the party turned out to be the goons failed to bulldoze their way through.

And this gave Yoo-Chan and Vincenzo to dig deeper into Babel and it’s malpractices. To their shock, the problematic new drug of Babel has a narcotic as the main ingredient and this fact was kept well hidden.

After a lot of effort, they manage to track down the escaped researcher and manage to gain his trust for the testimony. But faith has it otherwise since the prosecutor turned lawyer who joined Wusang is willing to do anything to protect Babel.

Both Vincenzo & Yoo get caught off-guard in an accident which ends up claiming Yoo’s life.

Not only him but the witness as well as 14 other researchers are killed off ruthlessly by Babel. This drastic turn of events changes Cha’s life.

She regains her senses and decides to call it quits with Wusang, Even though Ms. Prosecutor warns otherwise.

The plot picks up pace rapidly with Vin not wasting a second in threatening the prosecutor and her supporters almost scaring the living daylight out of them!

Now they have to play according to the rules set by Vin and he wastes no time in taking advantage. Next, we move on to the boss villain or the Babel supply station which we soon see up in flames done and dusted by yours truly & his gang of people who owed Yoo a lot.

Karma is served so fast and hot that it feels immensely satisfying. Episode 4 ends with a shocking twist which reveals to us the main bad guy giving us viewers a spiked curiosity!

These two episodes were insane, to say the least! Just on the 4rth episode and we already have crazy reveals, revenge as well as the truck of doom.

The exaggerated comedy made me wonder if it’s gonna be worth watching but the sudden and deep dark turn flipped things up. From a goofy show, it suddenly turned real grim real fast. It’s to be expected that episode 5 will continue in the same directions.

How dirty Law gets and the terrible consequences which may await honest lawyers are shown very realistically. But at the same time, our heroes are not fools and know how to get things in their favor which makes it so much fun to watch.

The emotional touches were done well, with Vin’s past and his mother being the lady Yoo wanted to represent. It was surprising to learn that Yoo was aware of Vin being her son and it was heartwarming to see him care about him.

The final heist-ish hijack that led to the most satisfying moment yet was honestly such a mood and something we viewers wish to see more of! Episode 5 better drop asap.

Since now it’s known at least to the viewers, who the villain is and how close he is to the leads it’s clear that episode 5 onwards it will get darker.

The prosecutor already had a hunch that Mr. Jang isn’t the actual head & Vin seems to realize this too. So a cat & mouse chase can be expected in episode 5 to uncover the true identity on both sides.

At the same time, Vin needs to hide as well as achieve his motive which seems to get more and more difficult. Now at the center of attraction Cha & Vin should be expected to work in complete sync cause it is the only way to keep Babel at bay. By the end of episode 5, their survival will definitely depend on this.

On the other hand, the true head of Babel is a two-faced guy, who appears to be cruel enough to get rid of anyone. In episode 5, we are likely to see more of this side particularly aimed at the unsuspecting leads.

Now then grab a bowl of popcorn and don’t forget to tune into Netflix on Saturday & Sunday to catch the new episodes!