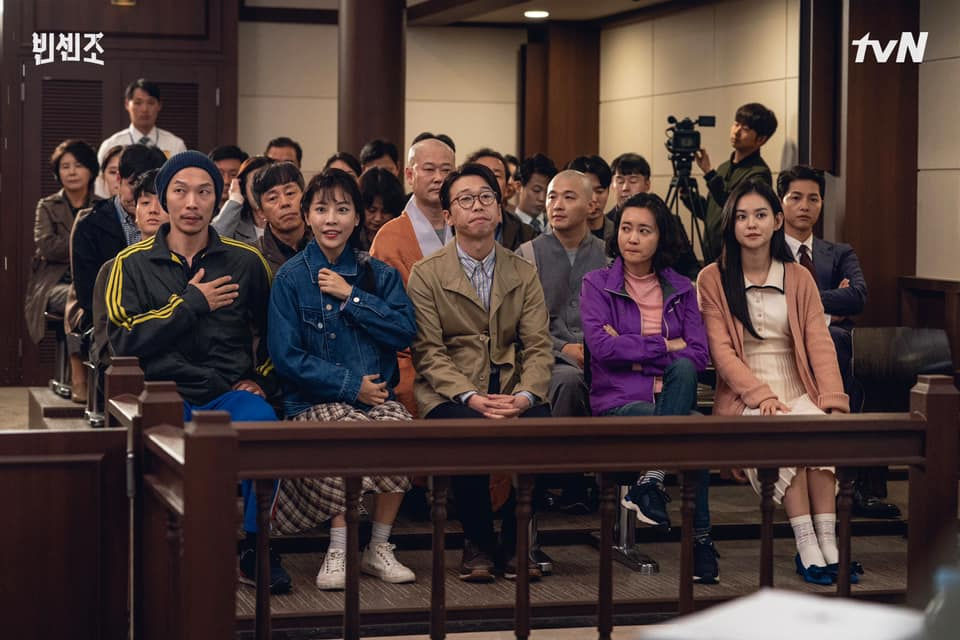 Crazy antics, perfect chemistry, unconventional methods and that’s what makes an entertaining ride! Vincenzo’s highest ratings yet with a peak of 7.5 percent are a clear sign of how much it’s being enjoyed. The much-awaited battle between the lawyers finally takes off and is a sight to behold.

The protest in or outside the court, all seem to be in Vincenzo and Cha’s favor but what’s more interesting is how our good guys are not scared to play dirty meet their goals! Even with the consistency being imbalanced due to the constant shift between comedy and the much darker undertone, Vincenzo proves to be an intriguing watch thanks to its creativity.

Yet again episode 7 promises to be even more interesting with expectations of a head-to-head showdown between our crazy lawyers.

What Goes On In & Out Of The Court

Episode 5 set up everything for a heated courtroom battle. With Vincenzo confirming that Mr. Jang isn’t the head of Babel and the monk’s friend developing leukemia while being a part of Babel Chemicals.

Cha & Co. dug as deep as they could to find out about the new chemical BLSD. Turns out this chemical had also been very problematic and caused Leukaemia in those who used it.Including the monk’s pal.

Vowing to end this injustice, they head to Wusang and state that they are now representing the victims from BLSD whom Babel was trying to shut up.  Myung is unimpressed and warns the former to stay in their lane though this advice falls on deaf ears.

But Vincenzo & Cha are confident, he also makes no show of hiding the fact that he was the one who attacked Myung. Episode 6, starts off with Vincenzo & Cha looking dashing arriving in an expensive car. Clearly stealing all the attention instead of Babel, while heading to the court. Meanwhile, outside the plaza residents put up quite a show in support of the victims.

Bemused, Myung puts up a strong offensive claiming that the researchers were at fault for not following safety regulations and Babel was just falsely charged. Visibly stressed, Cha can barely speak up and reveals that she has off late been suffering from panic disorder.

Though it’s shown to be a plan of Vincenzo & her, towards their ulterior goal of delaying the trial. When this fails, plan B is set in motion by Vin which is a blackout yet again the bribed judge doesn’t let this go by and orders to continue the trial. Now it’s time for the final resort that is letting out hornets & creating chaos!

With careful calculation, they make sure that the judge is stung and is in such a bad shape that the trial has to be ultimately postponed. With their hilariously creative methods, Vincent & Cha emerge victoriously and leave with their heads held high. While Wusang is left humiliated and furious.

Babel wastes no time in getting down & dirty after Joon aka Cha’s apprentice reveals himself to be the actual boss. They try to pay off the witnesses, get their treasurer out of the picture as well as drug the remaining ones to make sure they are no longer credible.

With their backs against the walls, it is clearly an uphill task for Vin & Co. to fight against Babel and  Babel is at ease knowing this. Yet again Cha surprises them all when in the second trial she announces a surprise witness and who could it be but Vincenzo himself!?

Just when we thought that Cha and Vincenzo are done fore they drop such a bomb!  What does Vincenzo have hidden under his sleeve this time? Granted, he probably knows exactly everything about BLSD but that alone cannot grant him credibility as a “witness”, so its going to be really cool to see how he pulls this deal off.

Though even if they manage to get a draw there are still many underlying factors. Joon wo is clearly not playing, no matter what he feels for Cha he can hurt them way too easily. As if his two personalities are not scary enough he’s willing to play along with Vin & Cha seriously. His violent aura is expected to show up in episode 7.

But all of this has still not caught Vincenzo or Cha’s eyes. So it will be safe to expect episode 7 to bring the limelight on Joon where he may finally show at least to Vin, that he’s the boss. Getting rid of the obstacles with no strings attached is an easy peasy job for Babel. And unfortunately, Vin’s side has many liabilities, including his mom.

Episode 7 is expected to bring a lot more legal drama, unpredictable tactics, and violence. Babel will definitely target the residents soon since we see this suspicious homeless man who may be a spy. Then again Vincenzo may have a few more tactics up his sleeves, but the situation with his mother may become a huge weakness.

Another issue is Mr. An and his spying on Vincenzo. Even though he seems to be on the wrong track thinking that Vin is repenting for his sins, he may actually be the one closest to finding out Vin’s secrets. Come episode 7 and the worst may be expected since this man has to report to both Babel & Wusang.

Episode 7 is expected to get brutal and rough, but with how the writers have been able to force comedy into the earlier episodes they may do it again. So sit tight and wait for episode 7 to air on 13th March 2021.

Without a doubt, Vincenzo has definitely piqued my interests, even with the forced comedy. It is like the charm of the show. We know it is gonna be dark, we know Vincenzo is always prepared but can’t expect the worse situation.

Consistency is key, so I hope they manage to pull it off without over-exaggerating anything. The thing with Vin’s mom feels a bit out of place cause they forget about it for a while then suddenly bring it up again. Hopefully episode 7 onwards we will some depth without it becoming awkward.

Also lets him Chef Toto’s suspicion regarding the homeless man makes him speak up to Vin cause otherwise, they may take a hit! On the whole, we viewers are really hyped up for the upcoming episode with all its twists & turns.