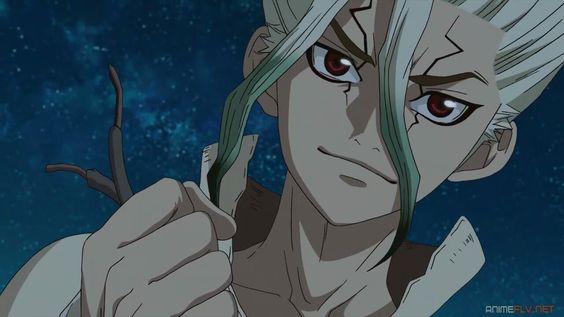 Ever thought about what Exactly caused petrification in the world of Dr. Stone? Well, we did. And here’s what we have.

Dr. Stone, An anime based on how a mad-scientist, Senku, and a muscle-head Taiju forming up to re-inhabit the world after everyone has been petrified and turned into stone. While Taiju is confessing his love to Yuzuriha, a strange magical light turns everyone in the world to stone. He wakes up 3700 years later(Senku has been counting from 1 to 116,683,200,000 seconds) and realizes his friend, Senkuu, is responsible for helping him gain consciousness. Senku has already decided that he will find the secret of petrification and Taiju helps him along the way.

They revive two more people, Tsukasa (a very strong fighter) and Yuzuriha. And, the rest is history. The plot might be a little ingenious. However, the story is very interesting.

Synopsis: After five years of harboring unspoken feelings, high-schooler Taiju is finally ready to confess his love for Yuzuriha.

Just when Taiju begins his confession however, a blinding green light strikes the Earth and petrifies mankind around the world.

Among a stone world of statues, Taiju encounters one other living human: his science-loving friend Senkuu, who has been active for a few months.

Taiju learns that Senkuu has developed a grand scheme—to launch the complete revival of civilization with science.

Taiju’s brawn and Senkuu’s brains combine to forge a formidable partnership, and they soon uncover a method to revive those petrified.

Senkuu’s master plan is threatened when his ideologies are challenged by those who awake. All the while, the reason for mankind’s petrification remains unknown.

(Note: If you haven’t read the manga, and if you hate spoilers- you may stop reading now)

The Treasure Island Tribe possesses an object that produces a scaled-down, localized version of the Petrification. Petrification turned humans physically into a stone.

The humanity that was once affected by the petrification ray can now be restored through Nitric acid.

According to the manga, there is an island that possesses an object that produces a smaller version of the Petrification. The exact radius of this Petrification can be controlled and is used to prevent the humans of Treasure Island from leaving.

Eri’s Quirk True Extent! Will it be Useful to Lemellion in...