Spoiler Guy
Home Discussion Who is the father of Izuku Midoriya (Deku), Is he All for... 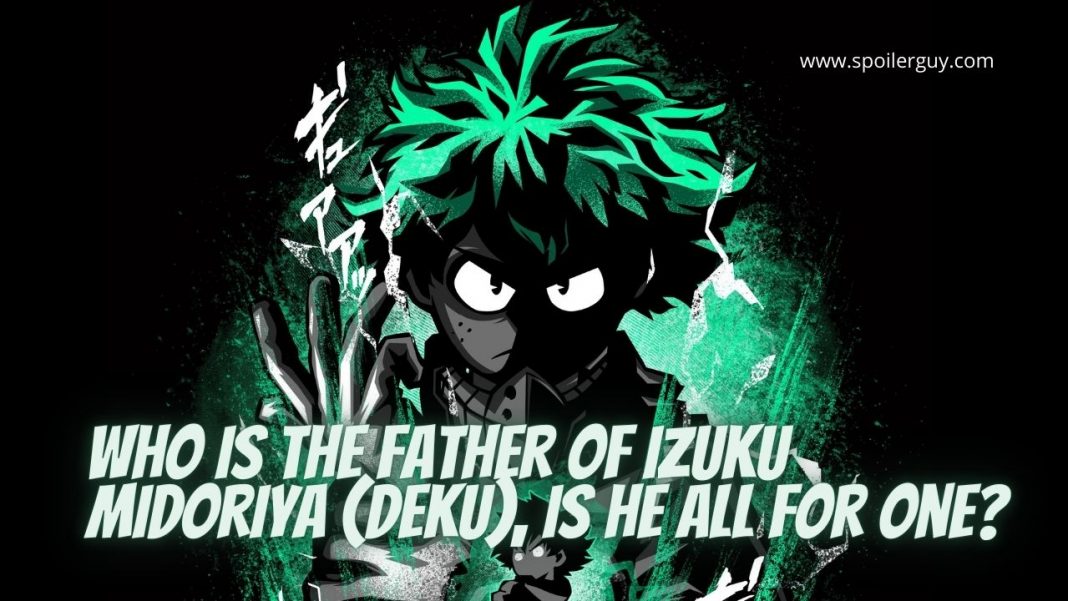 What is Deku’s father’s name? This is a subject that we have all pondered as we began to follow the journey of Midoriya Izuku, a young kid in his early twenties. My Hero Academia is a fantastic narrative about a guy who is born without a quirk in a world where the majority of the people is born with a quirk, and how he overcomes this obstacle.

yoooo deku what did you do!!!!! wanted for mass murder? wait did you know ur dad is All For One aka Hitashi Midorya and ur stepbro is Tomura Shigaraki aka Tenko Midoriya pic.twitter.com/iJAMMfzi3c

Quirks are unique abilities that most people are born with or develop through time. Normally, they are passed down through families, but Izuku was born without a quirk. Did he, or didn’t he? As a result of recent findings, there is a potential that all that has been said up to this point has been a hoax. In this article, we’ll talk about Deku’s father and the information that has been revealed about him thus far. In addition to this, we will investigate the possibility that he is hiding his genuine identity and the reasons for this.

Inko Midoriya, Izuku’s mother, has appeared several times throughout the course of My Hero Academia. She has always been the one who becomes concerned about Izuku whenever he is in danger. Furthermore, she has attempted to prevent her child from putting his life in any further jeopardy. In Toshinori Yagi “All Might,” Izuku was fortunate enough to have a father figure in his life, which helped him achieve his dream.

Neda's newest BNHA SMASH comic is a reference to Ch. 26 where Class 1A puts on a school play and Deku messes up his line by saying "DAD" instead of "bankruptcy" (both is 'tou-san'), and Bakugou does improv to save the show LOL. Here's the translation for both versions! pic.twitter.com/O3foQz8DyQ

He was successful in convincing Inko to allow Izuku to resume his studies and training in UA. However, while it is a relief for the fans to learn that Izuku does have a role model in his life, what about Deku’s father? In response to Izuku’s dream, what does he think? Does he even give a damn? Is he even aware of the events that take place in his life? According to the appearances, either he doesn’t care, or he simply doesn’t care enough to bother. Regardless, who exactly is he? And, more importantly, where is he right now?

Who could be Deku’s Dad?

It’s amazing how many shounen anime heroes have a father who has gone missing. These characters include Goku, Naruto, Gon, and others. In absolutely no way are these fathers, who are eventually revealed in the novel, anything like being inconsequential in the story.

In the Saiyan world, Bardock was a scientist who opposed Freeza’s rule. He was Goku’s paternal grandfather. For Gon, however, the entire tale revolves around Gon’s search for his Hunter father, Ging Freecs, which takes up a significant portion of the narrative. Naruto’s father was the Fourth Hokage, Minato Namikaze, who reigned as the most powerful man in the world.

#MHA300
Deku’s dad is Endeavor all along… pic.twitter.com/DNLmQ9pgQP

Consequently, there is little likelihood that Izuku will be an exception in that his father will be shown to be someone who is unimportant to the story’s progression. If it is revealed that Hisashi is a laid-back character, the fans will be outraged beyond measure. As a result, the likelihood of MHA Mangaka Kohei Horikoshi doing something like this is extremely low.

Furthermore, he indicated that Hisashi’s identity will be revealed in the My Hero Academia manga in the near future. While we wait, we can only hope that he will contribute anything significant to the story. Allowing for the possibility that he does not, let us simply hope that Hisashi proves to be a positive role model for Izuku and that he provides some appropriate words of encouragement to him.

This is all about the discussion behind Deku’s Dad. The article will be updated when more information is revealed about the same. Till then Stay tuned to Spoilerguy.