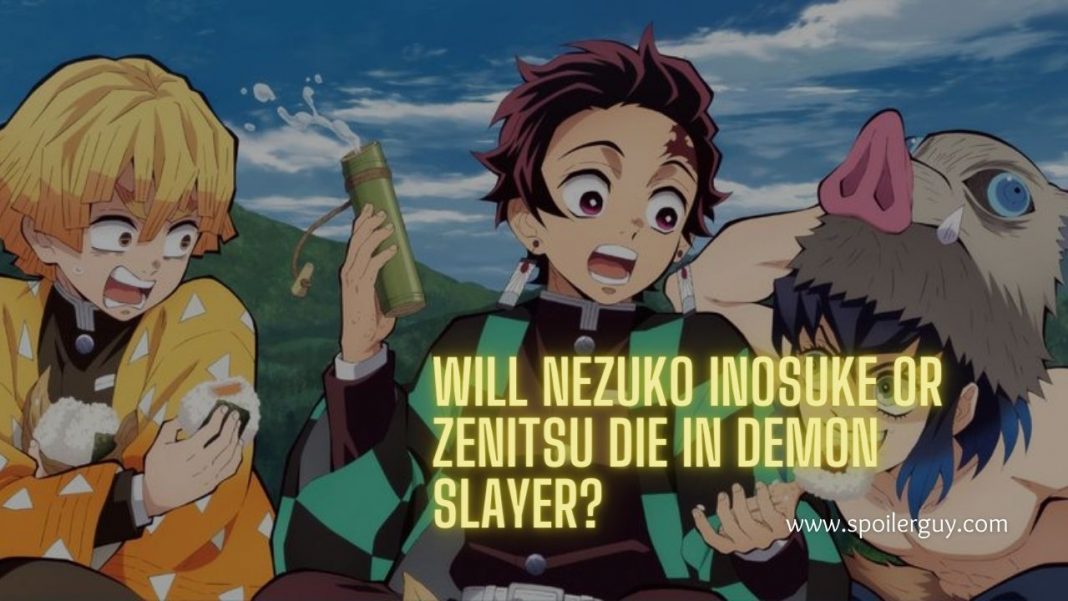 Demon Slayer has been a hit worldwide. It has battled with classics such as Spirited away taken the sales by storm. Also according to the latest reports Demon Slayer Season 2 isn’t far!! The trailer has already been released. The stubborn character in Tanjiro to save Nezuko has inspired Inouske and Zenitsu a lot.

In the movie Mugen train, the story ended with the heart-aching death of Kyōjurō Rengoku. This has left everyone wondering about the future of the other characters. So in this article, we are going to discuss if Nezuko, Inouske, or Zenitsu have a survival chance in Demon Slayer.

Zenitsu and Inouske might have been lazy in the beginning but Tanjiro’s character had made a lot of difference in them and they were made to leave their beds. At the end of the training, all of them were equally capable to fight demons and get closer to their real enemy Muzan Kibutsuji. Previously the death of Rengoku has left everyone in huge pain. No one expected it or were probably expecting a last-moment miracle but nothing much happened.

For future missions, Tanjiro will be accompanied by Inouske, Zenitsu, and Nezuko for sure. Since we know the strong bond that exists between the two siblings. On that note, we can expect a strong bond to develop among the others as well. Zenitsu is already obsessed with Nezuko. We have all seen them fight till their last breath. However, with the enemy getting stronger death is inevitable. Somewhere or the other there will be sacrifices and it’s hard to predict who will be the next one!

All the characters in Demon Slayer have special abilities and they have further abilities to push themselves to extremes in order to save humanity. With time we can also expect Nezuko to develop her fighting skills and maintain her human side as much as possible. As per the plot till now, we can expect all of them to grow stronger together with every mission.

We have seen the coordination between Inouske and Tanjiro while fighting the spider family. The way Tanjiro, Inouske, and Nezuko tackled the spider family especially Rui Ayaki. It was commendable. considering the fan base who have loved shone all these years should be prepared for the upcoming deaths only if it has proper reasoning behind the loss.

Tanjiro, Nezuko, Zenitsu and Inosuke are back, along with the Sound Hashira, Tengen Uzui.

Demon Slayer: Kimetsu no Yaiba Entertainment District Arc will be streaming in 2021 on Funimation!

That’s all about the future deaths of Inouske, Zenitsu, and Nezuko. With the plot proceeding, we will see them grow more mature and stronger during battles. Since the future of demon slayer association will be passed down to the younger generations with time and it is upon them how they eliminate the enemies and bring humanity back to peace.

This is all about Inouske, Tanjiro, Nezuko, and Zenitsu!. The article will be updated with time. Till then stay tuned to Spoilerguy.