Spoiler Guy
Home Discussion Will Takemichi save Hinata from dying in Tokyo Revengers? 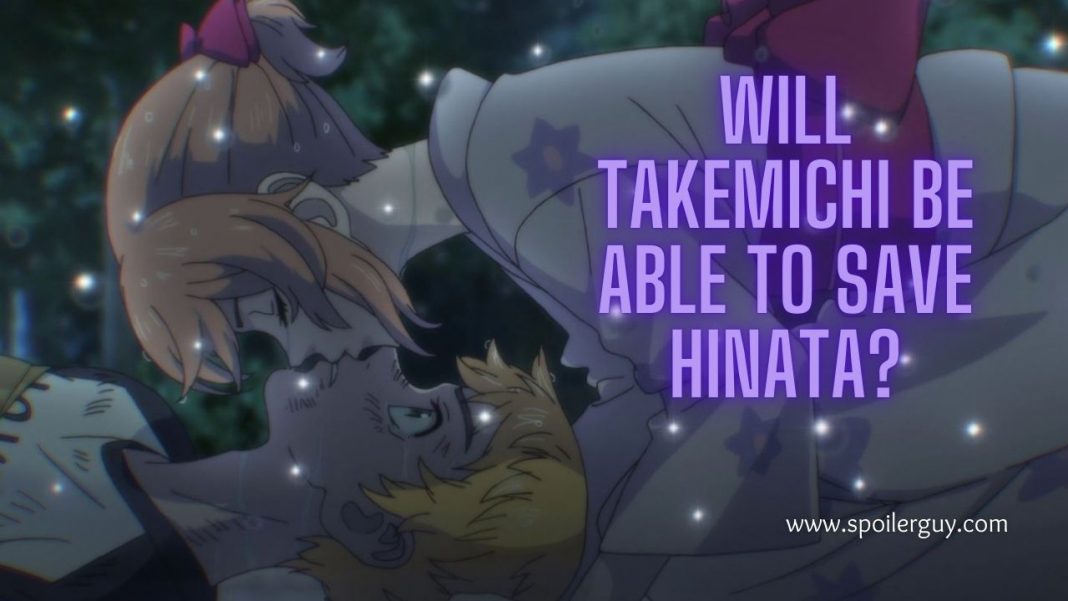 Tokyo Revengers have blown the sales and captured the hearts of everyone. The plot has been continuously going through various ups and downs. It has been also making the fans worried about the direction it has been ending. Takemichi has traveled from present to past a number of times and it has all been giving different outcomes. However, his only aim was to prevent his high school girlfriend, Hinata from dying.

This article consists of spoilers, don’t read if you haven’t read the manga.

Takemichi Hanagaki is the protagonist of Tokyo revengers, he has always been persistent on his goal from the very beginning. From being a snob he changed into a whole new character just to beat the future for saving Hinata. However, there have always been many people who have come in between them. Tetta Kisaki has been one such obstacle.

Why isn’t the future changing for Takemichi and Hinata?

The main reason for Hinata dying in the future is due to Tetta Kisaki. It is later revealed in the manga that Tetta Kisaki shares a past with Hinata. Back in the days when Tetta Kisaki belonged to the same study group. Everyone avoided Kisaki and called him names because he was a nerd. It was only Hinata to have treated him as a friend. But one day when Hinata was being bullied, Takemichi appeared as a hero in a cape and saved Hinata. It is since then that Tetta Kisaki had an eye on Takemichi and win back Hinata.

What is the reason for Hinata to die repeatedly in the present?

Tetta Kisaki always had a crush on Hinata. He always wanted Hinata to recognize him and in order to become that. He joined to become the Tokyo manji group and other gangs. With his extreme intelligence and smartness, he wanted to climb the ladders of powers and get recognized. In the future with incredible powers, he is able to control everyone in the group.

After rising to the top he asks out Hinata to be his girlfriend however she completely rejects him. This hurts his pride and he kills her with planned accidents. To overcome these accidents, the only way for Takemichi is to kill Kisaki such that he is not able to plan the accidents anymore.

Takemichi does everything to stop Kisaki. In the battle of Valhalla against Tokyo Manji, Takemichi is left to fight a war against the mighty Valhalla without Mikey or Draken. On the other side, Valhalla was headed by Tetta Kisaki as second in command. As for Tokyo Manji, the other leaders are heavily injured. The battle is fought with a major difference in the number of members.

However our hero Takemichi did not give up. His face was crooked and his teeth broken. With the return of Mikey and Draken, the battle was eased for Tokyo Manji and Takemichi could finally fight Tetta Kisaki face to face.

On their face to face, Tetta Kisaki reveals his past with Hinata in playschool. Since then Tetta Kisaki has tried to change himself into a whole new person and become someone recognized and have control over Tokyo Revengers in the future. Following their confession, Takemichi was chasing Tetta Kisaki with a gun. A truck ran into him in the middle of the road and Kisaki died in the accident.

What is stored for Hinata and Takemichi?

With the death of Kisaki, the Tokyo Maji group is disbanded in order to protect everyone in the future. At present, Takemichi is about to marry Hinata. Both of them share the same ever-lasting love for each other. However, there is still someone missing in the present, it is none other than Mikey. To save Mikey, Takemichi returns back to the past and misses his wedding. Therefore, in the end, Hinata is saved, however, nothing much can be said about whether Takemichi and Hinata will be able to end up together?

This is all about Tokyo Revengers! For more stay tuned to SpoilerGuy.