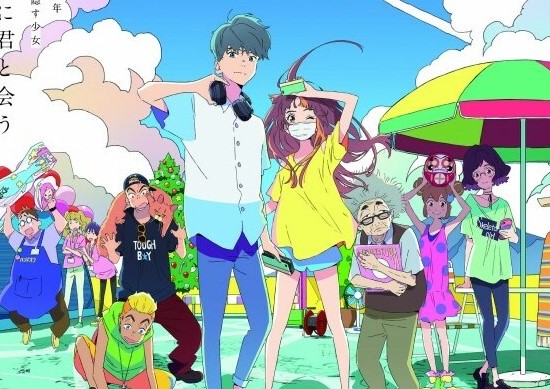 Wandering about the delayed anime films! Well, Kyōhei Ishiguro has announced that the film Words Bubble Up like Soda will finally release on June 25, 2021. The announcement was made at the Tokyo international film festival. Previously the film got delayed from May 15 due to the pandemic. With the new release date, Shochiku has updated the teaser of the upcoming film on their official youtube channel.

The story of the anime revolves around Cherry, a boy who is not good at communicating and wears his headphones all the time. And there is Smile, a girl who prefers hiding behind a mask since she is very insecure about her large front teeth. It focuses on how words can be replaced with music and in the process brings the two characters closer.

The anime film words bubble up like soda commemorates the 10th anniversary of Flying Dog. Flying Dog is a Japanese record label specializing in anime-related video and music software. Flying Dog is known as Victor Entertainment subsidiary M-serve. Kyōhei Ishiguro is directing the film. He has previously worked for Occult; Nine and Your Lie in April. Signal MD and sublimation are studios in charge. Dai Sato is in charge of the script. He has previously worked in Wolf’s rain, Cowboy Bebop and much more. Kensuke Ushio is composing the music. Yukiko Aikei is designing the anime characters.

For more information, you can click here to visit their official website. Stay updated with Spoiler Guy for the latest releases, spoilers, and much more.

My Hero Academia Chapter 265 Release Date, Spoilers And Where To...