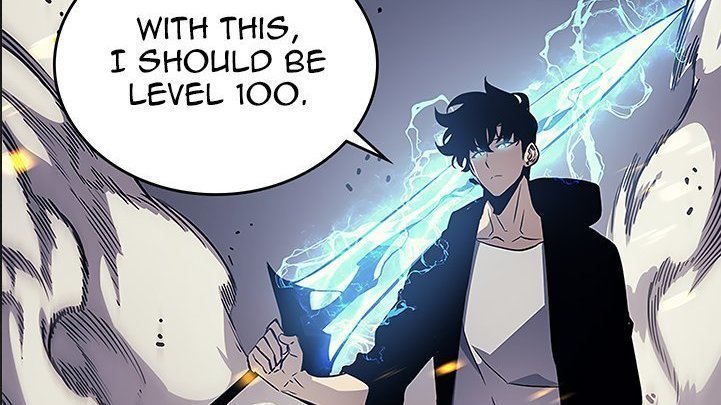 Readers are as excited as ever for Solo Leveling Chapter 109. The 108th chapter of I level up Alone aka Solo Leveling manhwa aired a while ago.

Solo Leveling is one of the most popular ongoing manhwas all around the globe. Well-known for the amazing battle scenes and wonderfully drawn characters, the manhwa is #1 on websites like MyAnimeList.

The previous chapter was titled, “Sung Jin-Woo- The Hero”. Moreover, it was an important chapter as it revealed major details regarding the new powers of our protagonist.

Before starting with Solo Leveling chapter 109, let us first discuss the events of I level up Alone manhwa’s previous chapter:

Sung Jin has become the greatest hero in Korea. Everyone is cheering for him, after declining the chairman’s offer of escorting him. Jin Woo encounters a huge crowd waiting and cheering for him as he did the best he could.

There’s a special scene where the grandpa comes towards him with teary eyes to appreciate what Sung did. Jin Woo later gets escorted as the crowd is too much for him to handle.

After that, the Chairman gave a legit explanation to the crowd. In the online forum, he said: “Even though Sung was an S-ranked hunter, he lacked experience resulting in him being in reserve for emergency”. Ultimately, only he knew that this man did everything for his mom.

Official Tweet from the DNC staff regarding the previous chapter –

Later at night when Sung Jin-Woo was checking all his items, he encountered “Demon King’s Longsword” with a rarity ‘S’. A longsword that emits the power of a Demon Lord, Baran. He can use the sword to activate a thunderstorm in a particular area, this technique is called “Tempest of White Flames”. He might use this technique in Solo Leveling 109 or the other upcoming chapters of the manhwa.

Sung Jin then explains everything to his mom, the story of him becoming an S rank hunter. Moreover, he also said that he wishes to continue working on the same. His mom was worried but in the end, she says “I want to see you do what you want to with your life”.

Now Sung Jin-Woo has a different as well as Stronger reason to raise his levels. Readers are full of beans for Solo Leveling Chapter 109, and why not? Things are about to get serious now.

In the end, Sung finds a shiny key in his inventory, the key is “Key to the Karutenon Temple”. According to the key, Jin-Woo has met the required condition and he can now enter Karutenon temple.

This temple is a dual dungeon where Sung Jin-Woo fought to death and ended up getting the system powers. Jin-Woo hates the idea of this dungeon as it had the high-tier demon.

The chapter ends with Sung Jin-woo realizing that there’s still time left for him getting the title of “Demon Hunter”.

Fans are now looking forward to Solo Leveling Manhwa Chapter 109, and why not? The next chapter might reveal details regarding the new arc.

There have been various trending theories on the internet regarding Solo Leveling 109, some theories claim, Jin-Woo visits to the temple, while others say, he might power up a bit faster as he has a bigger reason to get stronger.

While you wait for I level up Alone 109, you can read our recent on- Demon Slayer 197, One Piece Chapter 973 Manga Delay, and My Hero Academia Chapter 263.

I level up Alone 109 Release Date

I Level up Alone aka Solo Leveling Chapter 109 will be out officially on or around Wednesday, 11 March 2020. Other important details regarding the chapter will be out a day before.

All the chapters for the Solo Leveling are exclusively available on its official website. Besides this, fans can also buy the hard copy to read Solo Leveling 109. We highly condemn the use of an unofficial website to read manhua. Moreover, if you buy the official version, it will help the creators and the staff.

I level up Alone 109 Spoilers

The spoilers and leaks are basically the raw scans, that are being translated by the popular translators on the internet. But you shall not worry, we will make sure to add the leaks and spoilers to the article, as soon as they’re out. Till then, You can put your opinions regarding Solo Leveling Chapter 109 in the comment section below.

When will the spoilers for Solo Leveling Manhwa 109 Release?

Generally, the spoilers get out 2 days prior to the official release date. The Spoilers for Solo Leveling aka I level up Alone manhwa chapter 109 will be out around 9 March.

The story of I level up Alone aka Solo Leveling is based on a popular Korean Light Novel with the same name, by Chu-Gong. The publication started in Feb 2014.

As for the plot, it revolves around: a world that connects with a portal to a world full of monsters.

The story becomes interesting when some people got powers and the ability to hunt the monsters. The protagonist of the story is Sung Jin-Woo who is an “E” rank hunter. Furthermore, every other hunter refers to him as “The Weakest”. Here is the review of the popular manhwa by Chibi Reviews:

The story changes when he and other hunters find themselves trapped in a supremely dangerous dungeon. Sung Jin-Woo hardly survives it because he obtains some strange strength. He is the only one who completes all the courses in this dungeon.

And this where he started his journey from the E-Rank hunter to the S-Rank hunter, from “weakest to strongest” hunter. As of now, the manhwa has aired 108 chapters, Solo Leveling Chapter 109 will be out soon.

Furthermore, Do follow our Social media accounts for exclusive Anime news, spoilers, and recommendations. We have posted the spoilers for Solo Leveling Chapter 109 on our social media.

I level up Alone 107 Spoilers, Where to Read Solo Leveling Chapter 107?