Spoiler Guy
Home Spoilers One Piece 981 Spoilers, Where to Read One Piece Chapter 981? 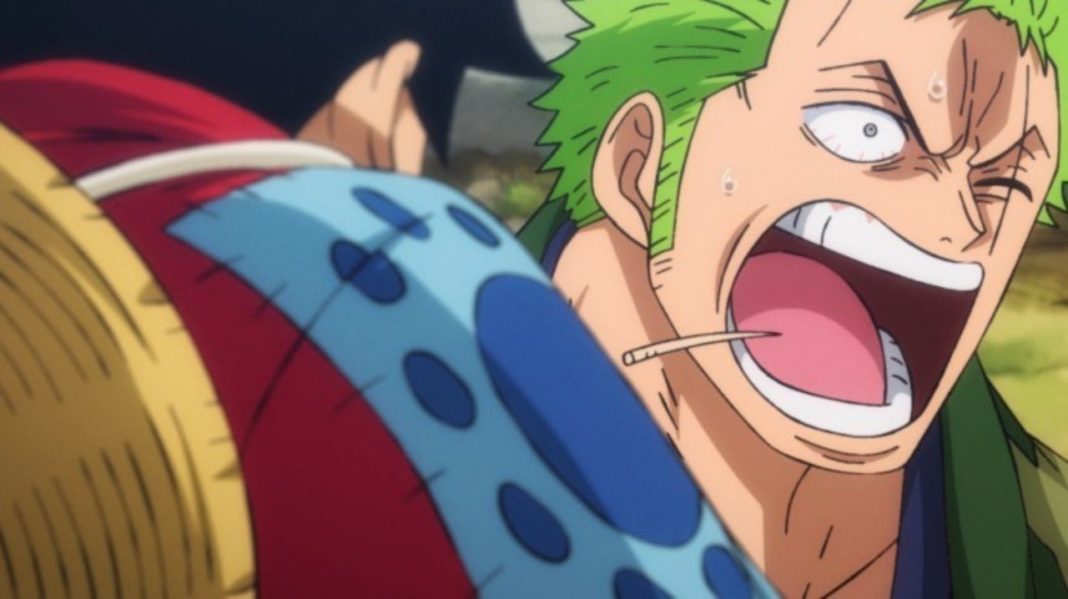 While the raid at Onigashima is reaching climax, readers are as eager as ever for the upcoming chapter. But it seems, the creator yet once again announced a weeklong break for One Piece manga. Chapter 981 of One Piece has been postponed to a new release date, and here is what we know regarding the manga chapter so far –

Luffy and Zoro are making their way towards Kaido’s castle, while Kaido’s crew is entirely focused on stopping them. Such a way they can get their hands on the seat of ‘Tobiroppo’. That being said, One Piece 981 will again be a Luffy and Zoro centered chapter. On the other hand, readers can also expect Scratchmen Appo vs Eustass Kid in Chapter 981.

You can expect some future delays in the airing schedule of One Piece manga as well.

Like every other time, we will be among the first ones to bring out the leaks and spoilers from One Piece chapter 981. Make sure you bookmark this page, to make sure you do not miss the early updates on this chapter.

The raw scans for Chapter 981 will release 2-3 days prior to the official release date. If there were no delay then the chapter would drop on May 28. However, keeping the one week delay in our mind, One Piece Chapter 981 spoilers will be out around June 5.

Predictions for Chapter 981 of One Piece manga

The upcoming chapter will finally be another battle centric chapter. In the previous chapter, angered Luffy wasted all the plannings, we have seen in the past few chapters. Kaido’s crew is now fully aware of Luffy’s arrival.

That being said, Zoro and Luffy will probably try to evacuate from the fight, as they do not want their plan to get ruined any further. Also, Kaido’s son might show up in this chapter.

In “One Piece” Chapter 981, There are high possibilities of Scratchmen Apoo vs Eustass Kid. The Queen would most probably reveal the name of ‘Tobiroppo’ whom he is going to slay in the upcoming chapter.

There have been predictions on the internet regarding Queen, King, and Jack joining the battle. However, as per our speculations, it won’t be possible until Sanji and other members show up. Moreover, Luffy still hasn’t shown up his new armament haki, there are high chances of his using it in One Piece 981.

Are we headed towards the final battle with Kaido? Since we are near the 1000th chapter of One Piece manga. Eiichiro Oda has some great plans for us. It could be Luffy vs Kaido, or Luffy pulling out a never seen before gear.

Readers all around the globe are looking forward to reading One Piece manga’s 981st chapter. The next chapter will surely reveal some major details from the story.

Where to read One Piece Chapter 981?

Like this chapter, the previous one was delayed as well. Chapter 980 was titled, “Fighting Music”. Luffy got angry when he saw the Beast Pirates wasting excess Oshiruko (the red bean soup) on the floor. At first, Zoro tries to stop him but when he realized what the beast pirates have done. Even Zoro goes on a rampage with Luffy.

One Piece, Ch. 980: Luffy crashes the party and finds some of the party goers pack quite a wallop! Read it FREE from the official source! https://t.co/TLWQODpKOD pic.twitter.com/5emNr16tHT

Apoo notices Luffy and uses this as an opportunity to get some praise from the Queen. Meanwhile, Queen is shown angry at someone from ‘The Flying Six’. In the upcoming chapters, there are high possibilities of Queen annihilating a member of Tobiroppo. On the other hand, Queen has offered the seat of an unknown member of the Flying Six to the one who will catch Luffy and Zoro.

Apoo then uses his “Fighting Music” to attack Luffy and Zoro. While Luffy stands unharmed, Zoro has got a cut from Apoo’s attack. On the other hand, Eustass Kid has finally decided to break silence and take his revenge on Apoo for betraying him in the past. At the end of this chapter, Kidd uses Punk Gibson against Apoo.

The members of ‘The Flying Six’ are:

Which member will Queen slay? We will surely get an answer to that in the upcoming One Piece manga chapter 981.

Chapter 981 of One Piece manga might start with confused and gravely injured Apoo.

The One Piece is one of the most popular Japanese manga by Eiichiro Oda. The manga is being serialized in Shueisha’s Weekly Shōnen Jump since 1997. As of now, the manga has aired a total of 980 chapters, One Piece 981 will be out soon. Please look forward to the official release of this chapter. Do comment on your opinions regarding the next chapter of One Piece manga.

Where to Watch Black Clover Episode 144 – Everything We Know...