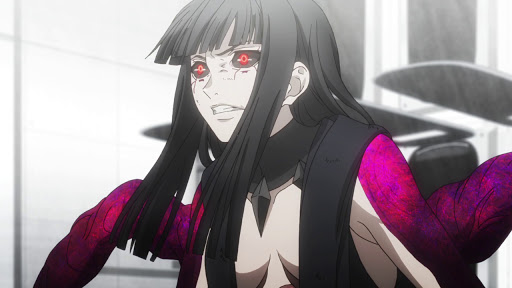 Dark fantasy, Horror fiction, Thriller are the words used to describe Tokyo Ghoul’s genre. It has a very niche fan base who can bare brutal bloodshed and other dark aspects of the anime. For all those die-hard Tokyo Ghoul fans, here are 10 Amazingly anime which will help you relive the Tokyo Ghoul fantasy. So without any further ado, let us start with Anime Similar to Tokyo Ghoul –

So without any further ado, here is the list of 10 Best Anime Similar to Tokyo Ghoul. The list includes anime with a similar plot, genre, or character development including the latest anime too.

The story revolves around Ganta who is the main protagonist of the anime when he has framed the mass murder of his classmates. Due to this, he is sent to a prison called ‘Deadman Wonderland’, but this isn’t any ordinary prison.

Deadman Wonderland is a gigantic facility run by the so-called prison population. Most of the prison’s attractions dwell in brutal games of survival where many prisoners lose their lives and are sometimes used for the entertainment of a particular group of people.

When we look at the similarities, Both Ganta and Kaneki witness a mass massacre and are later forced to learn and evolve in order to survive and live to see the next day. Both have an incident that happened to them that the world doesn’t know of and this alone makes it interesting to watch.

This is a mystery horror anime under the light novel series which focuses on  Kōichi Sakakibara trying to solve the mystery of the sudden deaths that take place after the death of Misaki in 1972. After being warned by the students of his class he still pursues his deduction in order to save further people from dying as well as himself.

The anime is filled with a spooky theme consisting of various twists and turns that make you want to watch the next episode. The reason why Another made to this list is that one of the main characters wears an eye patch as well as the entire anime revolves around a dark, horror, and mystery like the theme which is very much similar to that of Tokyo Ghoul.

The anime is portrayed as a dark romance that takes place between Yuuki Anzai who is a human-vampire hybrid and Tsukasa Tiara who is a university student. Their relationship faces hurdles due to Anzai’s bloodlust towards Tsukasa at the same time he also has feelings for her.

4) Kabaneri of the Iron Fortress

When a mysterious virus infects humans during the industrial revolution, they turn into Kabanae otherwise known as aggressive zombies. Hinomoto is a place with fortress-like stations that protect humans from Kabanaes. One day, a Kabane infested Hayajiro crashes into Aragane station which spreads the Kabane across the city.

When Ikoma tries to use his anti-Kabanae weapons he gets infected making him a hybrid called Kabaneri. He travels across the city with other survivors and Kabeneri fighting along the way to find shelter. Ikoma and Kaneki are both infected by another race and find it difficult to keep in touch with their human part. This anime is similar in terms of showcasing gory scenes and bloodshed in a very dark manner.

5) Seraph of the end

Due to the outbreak of a man-made virus over 90 percent of the population turn into vampires leaving kids below the age of 13 unaffected. A small group of kids is kept under the protection of vampires for receiving blood donations from them. they later decide to escape but are unsuccessful leaving Yuichiro alone who later gets saved by the moon demon company.

He trains to exterminate the vampires and take revenge for killing his family. Yuichiro faces a traumatic past like Kaneki and fights for the greater good. He similarly turns into a monster like Kaneki turning into a ghoul. The setting is way too similar to the humans facing against vampires in Seraph of the end and humans facing ghouls in Tokyo Ghoul.

It all starts when worm-like creatures come to earth and reside in human brains as a parasite. But one parasite while trying to make its way to the host’s brain it enters via the hand. Shinichi who is the male protagonist is the one with the awkward parasite in his hand.

Due to various circumstances, they tend to form a bond over time and fight against other parasites who are unhappy due to finding Shinchi’s brain still intact. The anime has extremely gory scenes with a similar male protagonist who has his human part tiresomely fighting against the alien parasite similar to Kaneki and his ghoul instincts.

Also read: Best Manhwas You Should Read in 2020!

The anime revolves around Kei Nagai who discovers he is an Ajin when he gets injured in an accident. Ajins are feared by humans and are mostly held captive for human experiments. Kei decides to escape from such a life by working with the government who are against Satou and other Ajins that escaped the government facility.

They are hell-bent on having an Ajin-human war to settle the deeds of the government. In both the animes the protagonist nearly dies and ends up becoming a monster as well being chased by the government.

Like most anime, this takes place in Tokyo, where a giant wall protects Tokyo form ‘Hell’s Gate’ which caused the appearance of people with special abilities and powers known as contractors. Every time they use their power they are supposed to perform a meaningless or painful task.

The story revolves around the main protagonist Hei who performs various missions and tasks to bring the contractors under control and more importantly find out about the meaning behind Hell’s gate. The darkness and action as well as the mask make it similar to Tokyo Ghoul and not to mention the cool and badass character of Hei is somewhat similar to that of Kaneki.

The anime is about Tatsumi who is the main protagonist and a swordsman who leaves home to save his village that is poverty-stricken. Along the way, he meets a girl named Akame who is an assassin that is trained to kill and is brainwashed by the empire. She and other professional assassins work together to take down the empire. Tatsumi challenges his way of life and morals along the way in order to know what it means to be an assassin.

In terms of darkness and uncensored gore and bloodshed, this anime is similar to Tokyo Ghoul. The animation and action sequences somewhat remind of the old Tokyo Ghoul days.

The atmosphere of this anime is very much similar to that of Tokyo Ghoul. Lucy who is a Diclonius escapes a facility and is found by Kouta and Yuka who take her in. Lucy being a Diclonius has horns and invisible arm like extensions from her back which can perform inhuman like functions. This reminds us of the abilities of ghouls.

Furthermore, they are chased by a number of other Diclonius who attempt to capture her and take her back. It has a dark fantasy and horror outlook making it similar to Tokyo Ghoul.

This wraps our list of anime similar to Tokyo Ghoul, for more such articles, make sure to bookmark us and follow our Social Media Accounts. Here is the trailer for Tokyo Ghoul anime –

Most Popular College Dramas For Everyone To Binge