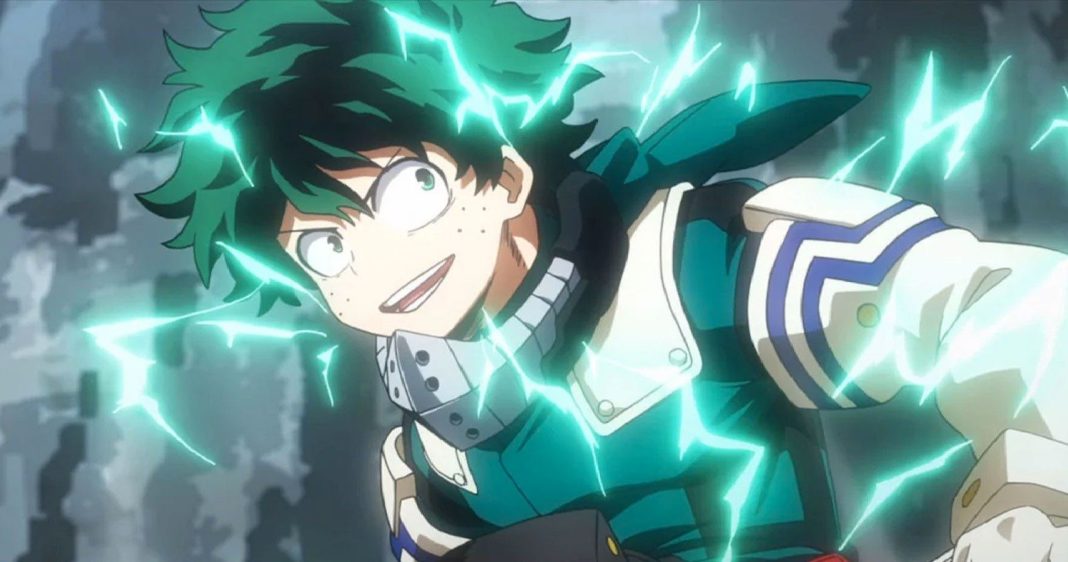 Let’s talk about our favorite quirkless hero, Izuku Midoriya. Deku his Superhero Alias was a name given by Kacchan. It means that he is useless. But Deku is proving that wrong and in Ochako’s words. Deku means you can do it. Have you ever wondered about Midoriya’s Hidden Quirk? Or Midoriya’s Full Powers, Abilities, Strength? If you have, then here’s a bit more. And if you haven’t, then don’t worry – we’ve got you covered.

And a fair bit of warning for the people, this Post contains Spoilers from the manga. Proceed on your own thought.

(Note: This blog post was written when Chapter 267 released)

Initially, Midoriya was Quirkless and weak but he did have a hero’s resolve. After receiving one for all from All might. He got a Power type Quirk as similar to All Might. When he received it he was unable to use it at all. Or so to speak, his body was too weak to handle the quirk. Up until now, in the latest season which is season 4. You could see him using 20% of One For All fully. And with Eri’s quirk 100% of that power.

One For All: His Quirk

Midoriya’s power, One For All, is incredibly unstable. The quirk, passed down from hero to hero, grants whoever wields it strength beyond imagination. With it, All Might became the symbol of peace and the number one hero in the world. However, Deku, being a fairly frail boy at the start of the series, couldn’t harness all his strength without breaking his body. He therefore, resolved to learn how to control his strength, only unleashing small chunks of it per fight.

A combination of a Quirk that can be passed down to others and a Quirk that stockpiles power and as well as the quirks of the people who cultivated the quirk.

Surprised eh! In Chapter 213 of the manga, Izuku met a vestige of One For All after his quirk seemingly went rogue, but it turns out he was manifesting the power of the predecessor. Now, according to the former user, Izuku has a total of six quirks he has inherited from those who came before him… and they combine into a seventh in One For All.

“One For All’s grown crazy strong thanks to the eight of us who came before you. So be ready, kiddo, cuz you’re about to get all six of our quirks!”

What can he actually use and has used till now?

We could see him use Detroit Smash against Muscular when he was trying to rescue Kota. And we could see how devastating it was. It is a punch enhanced by One For All. The air pressure from this attack is strong in itself capable of breaking buildings.

We saw this one quite early during the league of villian’s attack on UA. By enhancing his fingers with One For All and flicking, Izuku can fire powerful blasts of wind pressure from his hands. These blasts are powerful enough to cause vortexes in water and shatter giant structures of ice. He’s even shown the capability to use this with already-broken fingers, at the cost of disfiguring his right hand.

One For All: Full Cowl

In order to prevent breaking his bones when he uses One For All, Izuku created this technique. By channeling a fraction of One For All’s power and transferring it through his entire body, Izuku can empower his whole body. This grants him a boost in strength, speed, agility, and mobility, letting him scale buildings and make long leaps with ease. It also prevents Deku from injuring himself by evenly channeling power throughout his body.

One For All: Shoot Style

A variation of Full Cowl that only affects Izuku’s torso and legs. By concentrating the flow of power into only two areas, Izuku’s legs gain a much larger boost than when he uses Full Cowl on his whole body. Izuku developed this technique to compensate for the damage his arms were taking when he fought, letting him utilize a kick-based fighting style that allowed for more range and power.

Deku lets the full extent of One For All’s power flow freely through his body, granting him a tremendous boost to strength and speed that let him easily overwhelm the villain Overhaul. He can only use it without destroying his body in the process when in contact with Eri, who’s rewinding Quirk cancels out the damage he does to himself.

A rare state that allows Izuku to access to one hundred percent of One For All’s power, granting him strength on the level of All Might. However, using this will basically destroy whatever limb he channels the power into.

He can also push his limits as we saw in the fight with muscular. We saw him activating One For All 100% during an adrenaline rush to go even further beyond one hundred percent of its power, Deku does a point-blank Delaware Smash, followed up with a full-force Detroit Smash. This attack was enough to overpower Muscular’s Quirk and incapacitate him.

Do check our recent on: What caused Petrification in Dr. Stone anime?

We know that All for One is a power which is passed through the generations and there quirks with it. There were 8 Previous Owners of One for All. Which basically equates to Deku having 8 Quirks. We only know a few of those quirks.

We saw Nighteye using his deadly accurate prediction and in it, we saw Deku dying. But somehow that didn’t happen and Deku defeated Overhaul. Does this mean his quirk is too powerful or is it Deku’s own hidden Quirk? Whatever it is – it’s capable of changing the future.

In Chapter 257 during the Joint Training Battle, Izuku Midoriya unlocked Blackwhip, the Quirk of former One for All holder, Daigoro Banjo. Although the ability has proven somewhat difficult to control, Deku is now relatively proficient with it, though nowhere near the level of his teachers. And that is just one of it.

A lot of details are unknown about this quirk is still missing except the fact that it belonged to All Might’s Mentor, The 7th One For All User Nana Shimura. She’s the Grandmother of Shigaraki Tomura, the leader of League of Villains and One for All’s Descendent. Float allows its user to, well, float. Despite the fact, the Quirk will definitely power Deku up further.

That is all for the know Quirks and there are more potential quirks to be found out. I am sure that most of them will be revealed as soon as the Manga Proceeds. And we will keep you updated about it. There are also multiple theories about How Deku is not Quirkless and he has own hidden quirk.

There are a lot of theories and Speculations. Do comment about what you think I missed and what I should have included and don’t forget to share with your friends.

Stay tuned with us at Spoiler Guy to keep up with the updates and Make sure to follow our Social media accounts for exclusive Anime news, discussions, and spoilers. Also read our recent on Asta’s Demon.