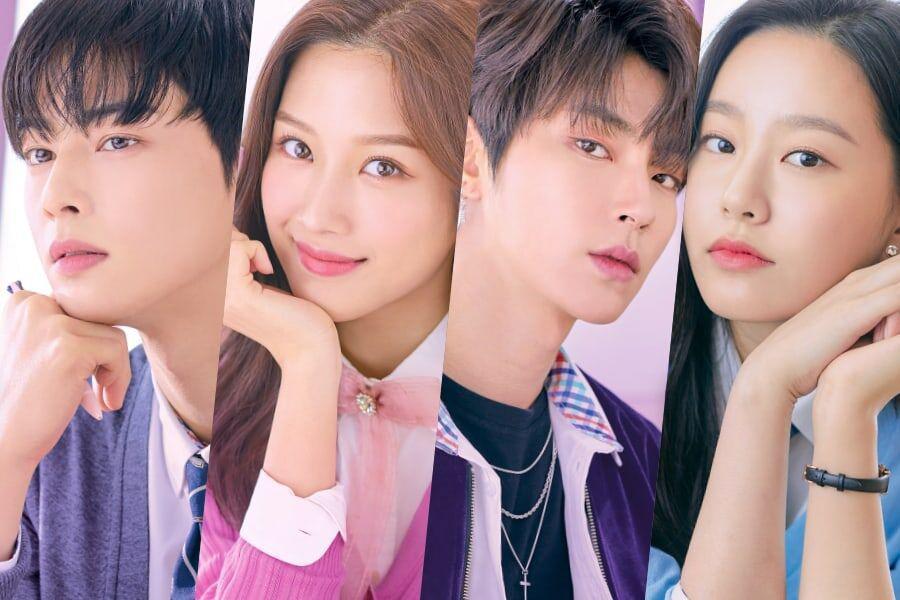 What makes a story or drama interesting? The characters, of course! From the hero and the heroine to the villain and the cute supporting characters, each of them brings life to the story. The best part about True Beauty is that the characters are realistic and very relatable!

True Beauty has a splendidly diverse range of characters. Due to the episode limit, many characters were cut and changed; therefore, we will focus on the main characters and their progress throughout the story.

So without further ado, let us delve deeper into the main cast.

The leading lady is your average high school student who is ugly and therefore constantly bullied. In contrast, to her usual shy self, her hobbies include reading horror comics and listening to heavy metal.

Speaking of her appearance, she is not the prettiest without makeup, but her ugliness is also just a fake person’s perception. Having been bullied for most of her life, she trusts them blindly when she finally makes friends. Of course, this puts her in a terrible spot later on.

But it proves her pure and kind nature. Im has low confidence and self-confidence, but with the help of Suho, Seojun, and her family, she musters up the courage to fight for herself.

She is no more dependent on others, their views, etc.; she is free, relaxed, happy, and confident. Im now has the courage to fulfill her dreams and never look back. This remarkable development impresses her peers and ultimately wins them all over.

Lim’s character evolves from being a fragile one to being a bold one.

Lee Suho, the charming, angsty, and emo male lead of our story. Suppose one has to talk about his physical appearance. It’s nothing short of perfect. He is tall, fair, and handsome.

Instead of a drop-dead gorgeous smile on his face, the only issue is that he is always expressionless and appears rather cold and rude, often frightening those who wanna get close.

He seems to have a fair share of complex issues, be it his ex-friend or estranged father and the so-called friends but rather people who are just interested in his money and looks. Not having clear support behind him makes Suho feel like a jerk instead of ML initially.

But one by one, his emotional constipation and trauma are revealed, and then most of his actions become understandable. Again like with Lim, Suho begins to open himself up, letting go of all his pain thanks to her and Seojun.

He becomes more social, smiles more, and tries his best to communicate more openly. Unfortunately for him, his life is full of numerous problems, so sitting back and relaxing is impossible.

But gradually everything turns out good. His character’s best part is how his emotional problems are forced out and remedied, making him a dependable and lovable male lead.

Another Mr. hot, charming but cute man, Han Seo-jun as the second lead, ready to make all fangirls suffer. He was also Suho’s former best friend, and bad blood arose between them due to a tragedy regarding their common friend.

He doesn’t let his emotion overpower his sanity, getting overprotective towards his friends and family. His lovable nature becomes the key to rekindling his friendship with Suho and becoming a confidante for Lim.

It is painful to see his one-sided pining for Lim, but at the same time reveals his good nature when he tries his best not to get between Suho & Lim’s love life.

His character involves eternal sacrifices, with a heart of gold. But at least he knows not to ruin himself for love and will always be a great friend for both Lim & Suho.

It started as being everyone’s girl crush, a stunning female, a model student, and the best first friend Lim could have asked for! But what happens when cold hottie Suho comes into the mix?

Nothing but chaos. A best friend turns into an enemy thanks to her boiling rage, jealousy, inferiority complex, and family issues. With the obvious differences between the manhwa and drama plus the way Su-jin was shown as such a positive character. There were hopes that she may not end up as the villain.

Initially, Su-jin was super caring and helpful towards Lim, even protecting her from a pervert. But as soon as she notices the development between Lim & Suho, the interest he never had in her, a switch flipped.

And in an instant, she had decided to destroy everything that Lim barely managed to gain, in a vain effort to make Suho break up with her. Alas, she failed to realize what she was destroying was her own life and could only cry when she alone suffered in the end.

It’s clear this rash decision was also due to her abusive father, but she should not have lost her rationality to jealousy cause the result was a disaster.

Her character is a clear depiction of how rash decisions and ill intentions harm the doer more than the victim.

Therefore,  to conclude, the characters of True Beauty are the embodiment of ” Don’t judge a book by its cover.”

Will True Beauty Have A Season 2? Expectations and Possibilities for the Korean Drama’s Second Season